Because the United States Supreme Court sits at the pinnacle of our system of justice, each year hundreds of lawyers seek admittance to practice before it–even though most know they will never argue a case there.  But admission to the Supreme Court means privileges in its law library and a separate entrance to the gallery to observe oral arguments.  Most notably, on the day of their admission, new members enjoy the “best seats in the house” to observe that day’s arguments. 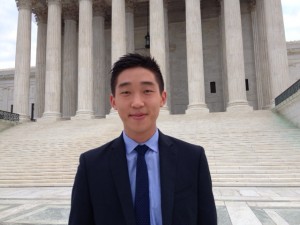 So, it’s no surprise that many American law schools hold an annual swearing-in ceremony to help their alumni celebrate the occasion of their admission to practice before the Supreme Court.  But Cornell’s festivities include a unique bonus.

In what has become an annual tradition, the LII sent the Editor-in-Chief of our Supreme Court Bulletin to Washington to brief the inductees about the cases they would be watching as part of the festivities.  Chanwoo Park attended the celebratory dinner at DC’s Monocle restaurant on December 2nd and provided some very welcome analysis about the cases the inductees would be watching from the Court’s gallery on December 3rd.

Chanwoo discussed two cases on very different areas of law that nevertheless shared a common feature. In each case, Federal Circuit Courts of Appeal were split in how to apply the law, and the Supreme Court would step in as the final arbiter to clarify the law.  One case examined the scope of preemption of state law claims under the Airline Deregulation Act.  The other involved false advertising claims brought under the Lanham Act.

Chanwoo’s trip was funded not by donor dollars but by the Law School’s Alumni Affairs Office, which is happy to make use of the Bulletin’s unique expertise to provide a much-appreciated overview of the Court proceedings accompanying the swearing-in ceremony.  Stewart Schwab, the Allan R. Tessler Dean of Cornell Law School, also attended the event and was very complimentary of both Chanwoo’s “great job” at the dinner and of the Bulletin generally.

The Supreme Court Bulletin features student-written analysis of every case to be argued before the Supreme Court.  These profiles feature a helpful recap of the important facts, a breakdown of the legal arguments both sides present in their briefs, and also analysis of the larger issues implicated by each case.   While entirely student-run, the Bulletin staff benefits from the advice of Frank Wagner, the retired Reporter of Decisions for the Supreme Court.  Bulletin excerpts also appear monthly in The Federal Lawyer, the magazine of the Federal Bar Association (FBA).

While lawyers certainly comprise an avid part of the Bulletin’s readership, the students strive to strip it of the sort of jargon and legalese so often prevalent in “insider” pieces written by lawyers for lawyers.  Bulletin authors also hyperlink their explanations and analysis to a wide variety of primary and secondary resources to enhance the value of each piece for readers from all backgrounds.  But neither the prose nor the analysis in the Bulletin is by any means “dumbed down.”  In fact, we frequently hear from our more than 20,000 email subscribers that the Bulletin is their preferred source for thorough and unbiased assessment of the cases argued before our nation’s highest court.  We even recently heard that from a sitting Federal Judge!

If you aren’t already familiar with the Bulletin, please have a look here, and we invite you to sign up here to receive this free service via email.