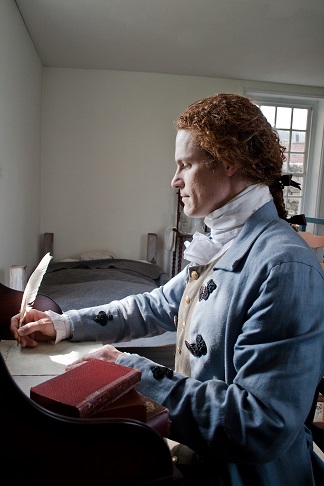 When looking for the next LII donor to interview, we thought: who better than a Thomas Jefferson interpreter during the birthday month of our third president? Meet Steve Edenbo, historian and impersonator of Thomas Jefferson for the last 18 years. Upon finding out that the Legal Information Institute has helped Edenbo in his career, we wanted to ask him a few questions.

Can you tell us how your role as Thomas Jefferson first began?

In 1999[,] American Historical Theatre, based in Philadelphia, saw me performing in unrelated theatrical productions. After observing my acting work and learning that my other favorite undertakings were reading and writing, they approached me for the role. I was surprised when they told me that I looked like Thomas Jefferson. I was even more surprised (and delighted) when I began to realize how fulfilling this work could be. The rest is history.

How many different scenes do you reenact as Thomas Jefferson? What is your favorite?

Technically, I don’t really reenact any scenes. My presentations —both monologue and dialogue— are interpretations of Jefferson’s life & philosophy. They’re based on careful research and study, but they’re less like a reenactment and more like a theatrical thesis. That being said, my favorites are the debates, which I think are usually more entertaining for the audiences too. As Jefferson, I regularly debate Chief Justice John Marshall and President John Adams for CLE seminars, judges retreats, etc. One of my most popular debates is with Alexander Hamilton. I’ve also debated Abigail Adams (a debate that really ought to be more popular), Patrick Henry, George Washington, Thomas Paine, John Dickinson, and others.

Are there personality traits that you would say you and Thomas Jefferson share?

Sure. Like him, I enjoy my privacy, which of course is an ironic thing to say while participating in an interview. Unlike him, I like speaking to audiences. After the show, however, I turn to solitude for replenishment. Early in my study of Jefferson, I connected with his universal curiosity. He loved learning and wanted to know about everything. Admittedly, his intellectual tools for gathering and processing information were exponentially greater than my own are, but I nonetheless feel a kinship of curiosity with him.

If you could have lunch with Thomas Jefferson, what is one thing you would ask him?

I’ve often thought about that kind of scenario. What I’ve determined is that he’d never answer the most nettling questions about him. He’d be an utterly charming lunch companion, but he wouldn’t hesitate to use his sparkling conversation and kaleidoscopic knowledge to mask anything he didn’t want to reveal. That’s part of where my interpretation of him parts from what he’d really be like if you met him; I work hard to engage directly with the most difficult questions that he would evade. Fortunately, it’s not my job to be Thomas Jefferson; it’s my job to tell his story.

Can you give a few examples of different events you have performed for?

Every July 4th for the last 16 years I have participated in a public reading of the Declaration of Independence at the National Archives in Washington D.C., followed by a day of interactions and discussions with the thousands of people who attend the event. This year at Monticello, on June 3d & 4th, we’re doing our second annual event centered on the story of how Jefferson was almost captured by the British at his home. Every year at Hamilton Grange National Memorial we invite the public to attend Hamilton v. Jefferson debates —one for younger audiences and one for adults (This year it will be on June 17th). I’ve appeared in a few episodes of the historical cooking documentary series “A Taste of History” with Walter Staib.  I perform regularly for Independence National Historical Park. Those are some highlights. I also give motivational speeches at corporate events, more traditional presentations at libraries, schools, colleges & universities, and other community events, and in-character “meet & greets” at cocktail hours, among other event categories. Sometimes I sit to lunch or dinner with very small gatherings of as few as two or three people. I send as much of my work as possible through American Historical Theatre, because they continue to be a wonderful organization serving a great purpose.

Is there a place you have not traveled yet, that you would like to for a performance?

Well, I’ll be checking a big one off of my “Jefferson Bucket List” this year when I speak at Mount Rushmore on October 6th. I’ve received inquiries from them before, but the scheduling never worked-out until now. Beyond that, I’d like to expand into the international schools market. I gave a series of presentations at the American School in London a number of years ago, and I loved everything about the experience. There are American schools all over the world, and I’d love to visit them.

You also play William Clark. How did that role begin?

It began in 2003/04 for the bicentennial of the Lewis & Clark Expedition, with a series of appearances at Philadelphia’s Academy of Natural Sciences. They were hosting the traveling exhibit on the Journey of Discovery. Clark is a fun role; his stories are much more exciting than Jefferson’s.

How did you first find the LII?

I found you while doing research. I do most of my research on the computer. I’m always looking for online sources of primary documents, partially because I footnote my scripts for later reference, and partially because I like to accompany my in-character social media posts with links to primary documents. LII has been especially helpful in researching and preparing the scripts and social media posts associated with the scripts I’ve been writing for the CLE Marshall v. Jefferson debates.

For those who don’t know, can you explain what the American Bar Association’s CLE programs are and how you’re involved with them?

Continuing Legal Education seminars (“CLE’s”) are accredited courses designed to maintain or sharpen the skills of licensed attorneys and judges. They are primarily operated and developed on a state-by-state bar association basis. My actor-historian colleagues and I join with attorneys, who serve as moderators in the debate programs, to present the 3&1/2-hour seminars. My favorite moderator to work with in this capacity is Donald Scarinci of Scarinci-Hollenbeck. Not only does he know his Constitutional law history, but he also gets the spirit of what our in-character presentations are trying to achieve. He helps bridge the gap between the “cut-off” dates of the historical figures (Jefferson can’t comment beyond July 4th, 1826, for instance) and modern day. The debate structure allows us to present complicated and often dense Constitutional history in an entertaining format. Personal conflict, and personality, of the founding fathers helps us to make the educational experience an enjoyable one. For instance, John Marshall and Thomas Jefferson hated each other, and the hatred was personal. Their families hated each other, and that intensely personal quarrel fed the political fire while it currently increases the theatrical tension of the CLE presentations.

What parts of the LII do you use the most?

I suppose I’ve already hinted at it, but your online SCOTUS opinions have been tremendously useful for me.

How would you describe the process of finding information on our website?

I’ve come to your resources by Googling specific court cases. When your name comes up in the search (which is basically always), I go to LII because I know that I can trust the resources and that they’re easily accessed.

You recently made a gift to support the LII’s work. Can you tell us why you decided to give?

LII’s free online resources played a key role in my research and writing of the new scripts for our Marshall v. Jefferson debates, which debuted for the New Jersey Institute for Continuing Legal Education in December. They were a big success, and will continue with the Pennsylvania Bar Institute in May and the Pennsylvania Conference of State Trial Judges in July. It’s become clear to me that LII is a valuable resource, and I wanted to help you continue to make it available to all.

What is one thing you like doing outside of your work?

When my work schedule allows, I add sightseeing to my Jeffersonian travel. National Parks are my favorites. I camped in Joshua Tree in January, and I’ll camp in Yosemite in May. Last week in Texas I visited Mission San José in San Antonio Missions National Historical Park. Another place I’d love to check off of my “Jefferson Bucket List” is Fort Jefferson in Dry Tortugas National Park, so if anybody in the Florida Keys is interested in a visit by Mr. Jefferson, do give me a call.