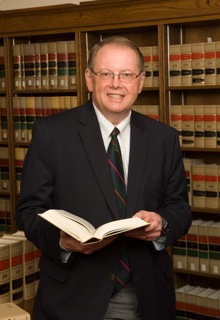 Frank Wagner, the longest-serving and most prolific Reporter of Decisions for the Supreme Court of the United States, passed away unexpectedly on August 28.  He was a good friend to the LII.

The first time I met Frank he scared the hell out of me. Peter Martin and I were meeting with the Supreme Court’s Director of Data Services to talk a bit about what we were doing with Supreme Court materials at Cornell.  At that point, sometime in 1996,  the Court did not yet have a web site; we were urging them to add digital watermarks to the electronic copies of the decisions they were distributing via Project Hermes.  We ended up meeting with Frank.  In a tone that I suspect he had perfected solely to freeze the blood of unwary clerks, he said, “If the public wishes an official version, they may refer to the bound edition.”  And that, it seemed, was that.

Except that it wasn’t.  Frank went on to guide the Court’s publication process into the online era, as part of the team that built the Court’s official website.  And nobody was more concerned than he was about public access to — and understanding of — the Court’s work.  I met him the second time at the Association of Reporters of Judicial Decisions in New York a few years later.  He had just given a talk in which referred to the work of the Reporter of Decisions as “an exercise in serial nitpickery”, a happy phrase coined by an earlier Reporter.  In the break after his talk, he came up to me and said, “I bet you could tell me what the ratio is between the number of people who read the syllabi in a case and the number who read the majority opinion”.  It so happened I could — it was, and is, about 7 to 1 in favor of the syllabus.   Apparently there was a difference of opinion between two of the Justices as to the value of the syllabi.  Frank wanted to bring facts to the argument.  Ever discreet, it was three years or more before I could wheedle him into telling me which two Justices were involved (out of respect for Frank’s discretion, I’m going to keep that to myself).  He was, more than anything, concerned that the public be able to understand what the Court had said, and he saw the syllabi as the best official vehicle for that.  And, though he never really said much about it, Frank was fiercely proud of that work — of its importance and of its precision.

We had many encounters after that; I remember after one lunch in DC telling my wife that I had just spent 90 minutes with the biggest grammar geek on the planet; another time, over a grilled cheese sandwich in the Court cafeteria, Frank told me about the night that Bush v. Gore came down, about the suspense and the hurry and the frantic cite-checking. The way he told it, it was as if they’d done the edit with bullets flying over their heads.  It was a great story.   Much later, I found that we shared a love of science fiction and some of its stranger byways.

When Frank retired, I had the good sense to ask him if he’d work with us and our students on the Supreme Court Bulletin and he had the bad judgement to accept.   He was a tremendous resource for the students and a terrific mentor.   He worked directly with the students whose work was scheduled to appear in the Federal Lawyer magazine, ensuring that we always put our proverbial best foot forward in that publication.  More importantly, though, because we try to ensure that every team of students has a chance to appear in that magazine, it meant that every team would also get the chance to work with Frank.  Frank frequently attended the orientation for our new Bulletin associates each August, and the Q & A he held was full of the great stories and even better advice that those of us who knew him had come to expect.

Frank once said of his job that “I do not kid myself that it has brought me even 15 minutes of fame in the wider world.”  In our part of the world, where saying things clearly and cleanly is important, he was a giant.

I will miss him.